MARK YOUR CALENDARS AS WE PREPARE FOR BIG EVENTS:

Did you celebrate World PVNH Disorder Awareness Day? Here is a montage of the landmarks lit up, and two of our Proclamations (the city of Vancouver and the province of British Columbia in Canada). 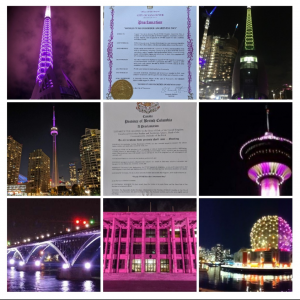 PVNH stands for Periventricular Nodular Heterotopia and is sometimes referred to as gray matter heterotopia (GMH). Another acronyms is PNH, usually seen in some medical journals.  It is a rare neuronal migration disorder which is also known as  BPH, BPNH, PVHand subependymal heterotopia. The most common form is X-Linked PVNH (previously called PVNH4), and is caused by a Filamin A (FLNA) mutation. PVNH can sometimes happen with other disorders such as Ehlers Danlos syndrome, or Polymicrogyria. In addition to gene mutations, choromomal abnormalities can cause PVNH.

PVNH Support & Awareness proudly supports more than 500 families in 33 countries and collaborates with world’s specialists, researchers, rare disease organisations and other groups of interests to make a positive impact in the lives of those affected by these disorders.

PVNH Support  & Awareness TM is a nonprofit organization of international reach which collaborates with PVNH genetic leaders, specialists, researchers. We also have alliances with some of the most outstanding rare disease advocates worldwide. PVNH Support  & Awareness TM was founded in November 2009 as a legacy for Yolaine Dupont’s daughter, Ella Dupont Bedassie. Ella was 7 months and 20 days when she passed away from respiratory failure brought on by what doctors did not know at the time was a rare disease: X-Linked Periventricular Nodular Heterotopia. The FLNA mutation she had is familial, with both Yolaine and her late mom also affected by the rare disorder.

PVNH Support  & Awareness TM exists to give affected patients and families a gathering place and to educate patients, families as well as medical and other communities about PVNH and other neuronal heteropia disorders.

This is for Ella, so that her death is not in vain and her memory keeps on living, forever.

Get your #pinkandyellow ready and join us on August 7th as we celebrate the 7th World PVNH Disorder Awareness Day!!