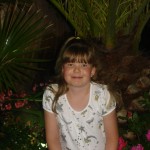 Jacqueline is a foster-child with a long medical history. Jacqueline biological mother died suddenly at the age of 30 years of an aortic aneurysm (associated with X-Linked PVNH, although not confirmed in birth mom).

– Her birth mom had a schizophrenic psychosis and problems with learning. .

– Jacqueline, at 2, joined her new family. She was disturbed and showed intellectual delays.

– She showed abnormalities in the muscle tone.

– Digestive problems such as with diarrhea and constipation.

– Failure to thrive.
– Digestive problems such as with diarrhea and constipation at 5 birth month.

– From the time she was 3 years, her parents ran from one doctor to another.

– At the age of 6 years, had her first generalized tonic-clonic seizures and an
MRI image showed periventricular nodular heterotopias.

–  After many investigations Jacqueline was diagnosed with Addison’s disease (adrenal deficiency).

– Brachydaktylie of the small finger and a discrete membranous, partial

– Syndactyly between all fingers

– A small form from learn problems ,perceptual disorder and disorientation